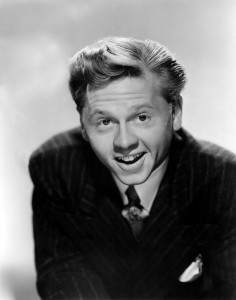 Rooney died in his sleep last month at the home of his step son. He was 93. Rooney worked with many notable stars throughout his career, including Elizabeth Taylor. Rooney, like Taylor seemed to have had a romantic heart. He was married eight times since 1942. He had 10 children, including two stepsons from two marriages.

When Rooney slipped the bonds of earth on April 6, 2014 he was at the home of his step son Mark Rooney, who he adopted after his marriage to Jan Chamberlin in 1978. Word has it that his son had been taking care Rooney for quite some time. There was an obvious bond and friendship.  Rooney’s will named Mark and his wife as the sole beneficiaries of his estate.

Rooney had the longest Hollywood career in history and leaves eight other living (adult) children. In the modern world of multi-million dollar movies and inflated Hollywood egos, some might wonder if there will be a fight over the estate of this legendary man, but it seems unlikely. Rooney’s estimated net worth was just $18,000. There’s not much to fight over. His will appears to be what wills should always be; a symbolic gesture of love and appreciation.

Stepdadding.com salutes a couple of great men and the son he loved and appreciated. Rest in peace, Mickey Rooney. You were a class act and a great Stepdad.