In Defense of Stepdads

Research shows kids who have two full-time parents do better in school and have fewer problems with alcohol, drugs and crime. So why are Stepdads made out to be the bad guy?! A committed Stepdad can be a positive addition to a single parent home. Sadly, Stepdad’s who are fully involved often stir the emotions of biological fathers. Many bio-dads feel threatened by a Stepdads presence in their kid’s life. They worry the Stepdad is trying to take their place. Humans are pretty evolved but we still hold on to some of our territorial behaviors. These are natural reactions. But these primal fears often create a game of tug-o-war …with the kids being used as the rope. 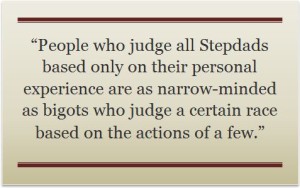 Over the years I’ve had some great conversations with concerned fathers. These fathers feel threatened when their kid’s Stepdad refer to them as “my kids”.  The reason for their concern varies, but at the core of the concern is the father’s feeling the stepdad is trying to take over his role as a parent. When a father feels threatened like this, it’s common for his concern show itself in the form of passive-aggressive behavior. These can be simple things, such as off-hand comments or lack of communication with the Stepdad or mother. These can become the seeds of bad feelings between fathers and Stepdads. Hurt feeling can quickly escalate into parental alienation; where parents talk openly to their kids about their dislike of the other parent(s). Though the frustration is directed at the other parents, the kids usually pay a high emotional price.

Understanding the motivation behind the phrase “my kids” may help fathers worry less about Stepdads’ intentions. So in defense of Stepdads, I want to share one Stepdad’s perspective. 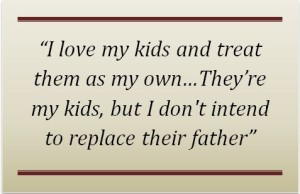 I refer to them as “my kids” because it’s how I approach my relationship with them -as a parent. A stepdad needs to develop a consistent mentality about his role. He has to see them as a responsibility not a burden. His approach shouldn’t leave him with the expectation of being “dad.” However, it’s reasonable for him to expect to be treated with respect by the children he’s helping raise.  I love my kids and treat them as my own, but I’ve never asked them to call me dad. They’re my kids, but I don’t intend to replace their father. I’m just one more parent who has their best interest at heart. I call them my kids because I don’t want them to ever feel they are less important to me just because we don’t share DNA. I don’t want them to have to wonder where they stand with me. Unfortunately, taking a pro-kid position can inspire a defensive reaction from bio-dads who don’t understand the motivation behind it.

There are major roadblock nearly all Stepdads have to overcome or accept.

These are just a few examples. It’s not the same for biological fathers.  They don’t have to accept a different set of rules. From the start, Stepdads have to accept that the odds of divorce are much higher and the likelihood of turmoil is also high. They have to accept that they have no legal say but still might have to pay child support if the marriage fails. And still, thousands of men each week make the commitment to be there as a Stepdad.

When You Marry a Single Mom, You Marry Her Entire Situation

From the day we say “I do” Stepdads are at a disadvantage. Most men who marry single moms don’t bring kids with them. See the statistics here.  More than 80% of Stepdads join a family as a single new addition. They enter a family in progress, with rules and expectations already in place. There’s often a good deal of residual turmoil from the breakup. As the only new member of the family, we have to figure out how to settle in without trying to change the thongs they feel is normal. If the kids’ father is still a part of his life we also have to walk a delicate tightrope and find the right balance with him. There are usually some hard feelings remaining when a couple breaks up –so we also have to figure out how to make it work while dodging any emotions remaining from the breakup. This can be complicated.

The Hardest Job No Man Has to Take

Many Stepdads are amazing men. 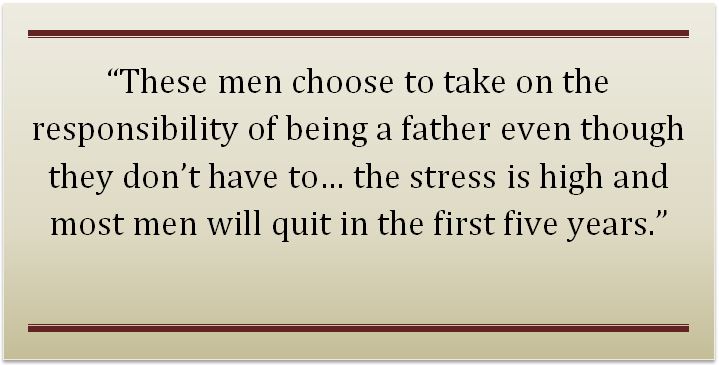 Most of these guys step into a very challenging role. They have to find a way to be comfortable in their own homes without making their new children uncomfortable. That’s a tough balancing act because many come into a situation where the kids have been alienated by two arguing parents. The kids are often resistant to more change. Stepdads have to struggle with the existing dynamic in the home. It’s a huge uphill challenge. These men choose to take on the responsibility of being a father even though they aren’t required to. It’s a noble effort, but the stress is high and most men will quit in the first five years.  Some guys handle it better than others.

Fathers make children and have a moral obligation to be there for them. Many walk away. Stepdads have no moral obligation to raise another man’s kids. But they chose to take on that responsibility. When another man is willing to do the hard work these fathers refused to they usually suffer for it. There’s a wide-spread stereotype of Stepdads that’s cruel and inaccurate… but socially accepted. When other groups of people are judged this way the people talking them down are considered bigots. But Stepdads don’t get that same respect. We’re an abused minority and an acceptable target for bias-based criticism. The problem is wide-spread. We’re often vilified in movies and TV shows, which re-enforces an ugly stereotype. People see news stories about horrible Stepdads and tend to believe most are like that. We’re tried and convicted in the court of public opinion. These negative attitudes make a difficult job even harder. Kids see these stereotypes too. They look for evidence their Stepdad might be one of the bad ones. 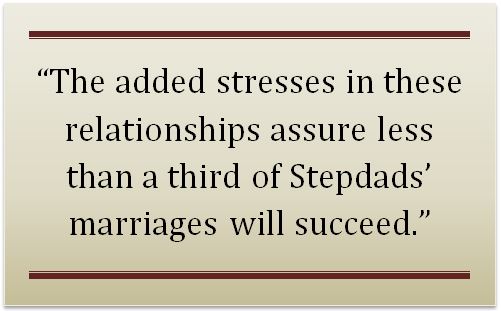 Stepdads have to work harder than biological dads. We have to prove ourselves: Not just to the kids, but to the mothers, the bio-dads and the extended family. Hell, we have to prove ourselves to society. Biological father don’t carry this king of weight. And it’s no small thing. The added stresses in these relationships assure less than a third of Stepdads’ marriages will succeed. When they do fail we almost never have legal rights to visitation and have no legal rights of custody. However, in many places we can be forced to pay child support. We’re one of the most underappreciated groups of people, but we continue to marry single moms at higher rates every year and continue to be treated unjustly by society and the legal system.

Someone told me we shouldn’t say “Stepdad” we should say “bonus dad.”

Apparently we need a euphemism now because Stepdad is becoming a dirty word. Bull! I’m taking “Stepdad” back. It’s not a bad word; it’s a title of honor! People who judge all Stepdads based only on their personal experience are as narrow-minded as bigots who judge a certain race based on the actions of a few. I’m a Stepdad and I am my kids’ parent. I dug the hole and cried with my kids when their pet died and I cheered the loudest when they succeeded. I’m a Stepdad. I’ll shout it from the hilltops and I’ll get a personalized license plate with “STEPDAD” on it. If that makes you uncomfortable too bad! Be proud of who you are guys. Be the best damn Stepdad you can be! And never be ashamed to love your kids.