We recently got an email from a new Stepdad asking how to define his role.

“Is there a general kind of standard that tells us what a step dad’s role should be in raising the kids? I want to help her and support her as a mom but without annoying her in the process. What can I do if the kids behave badly quite a bit and she lets them walk on her?
We’ve been married for three months and being a Stepdad is a lot harder than I thought it would be.”

We get a lot of questions on this topic so I wanted to take a minute to talk more about it.

Half way through my senior year in high school 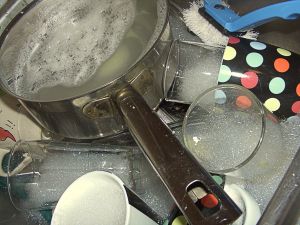 I was offered me a job washing dishes at a restaurant. “No problem” I said. I knew all about that. I’d been washing dishes my whole life at home. I showed up for work and immediately noticed that things weren’t exactly as I’d expected. They had high-tech equipment and some detailed processes. They also had a wide variety of chemicals and soaps I was supposed to use in a very specific order when I ran a load of dishes. There was a standard way they wanted the dishes delivered to various parts of the restaurant –some out front, some in the kitchen and some in the prep area. They also wanted me to clear the tables and refill coffee cups if anyone asked. I quickly realized it wasn’t as simple as I thought.

It’s very human to assume you know all about something before you realize you’ve got much more to learn. Many new Stepdads make the same mistake when they assume they know all about raising kids. They figure, “Heck, I was a kid once and I know how kids think. No problem. I’ve got this.” But many are surprised to find that it’s not as simple as they think. Kids are challenging. Each one is an individual. Some kids will respond differently to the same approach that worked with another. One child will easily comply when told to clean his room and another might tell you she’s not going to do it or even ask you why she has to.

Personalities, temperament and previous experiences all play into this –and not just the kids’. What a Stepdad bring to the table is just as important. We are all the product of our lifelong experiences. The way we apply what we’ve learned and experienced will have an effect on the kind of person we become. Kids are the same as adults but they’ve had less time to accumulate life’s experiences. But some kids have had a hard life. When children have been through emotional turmoil they sometimes can’t sort out their emotions as well as adults. When couples divorce, their kids often deal with a period of emotional trauma. Some kids never completely recover. Stepdads have to deal with the fact that their wife’s kids might not be interested in letting another dad into their hearts because it hurt too much when the last one left. Kids and situations are unique, so each Stepdad’s situation is unique.

a Stepdad but there isn’t. There’s not a standard expectation for what a guy’s role should be when he steps into those shoes. That can only be decided by you and your partner, but it’s vital to talk. Don’t make any assumptions. Your best intentions can lead you into an emotional minefield. Plenty of men assume that they know what their role is, only to find their vision is not the same thing their wives have in mind. These assumptions leave many men struggling with feelings of being unappreciated. If you are thinking of marrying a single mom you should first set aside some time for a sit-down talk with her.

Sure, a talk before a proposal may not be very romantic but it’s much better than having to back out after you’ve already asked. In this talk you should outline how each of you envisions your role if you join the family. You might be surprised to find that each of you will have a very different idea of what your role will be.

If she sees you as playing the role of a kind uncle figure and you see yourself as being 100% dad then you’re going to have problems if you don’t talk before marriage. Imaging how shocked she will be if you take a hands-on approach including punishments, when she expects you to handle them with kid gloves and be more of a baby sitter. It’s not uncommon that couples think they have complete agreement about the husband’s role, only to discover as they don’t agree at all. Be specific. Look at the details of the role you think you’ll be playing. Maybe you agreed you’ll play the role of a “father figure.” What does that mean to you? What does it mean to her? We each have our own perspective of what a father figure does. Equally important –we all have a perspective of what a father figure doesn’t do.

Make sure to talk about every detail you can

consider related to parenting. Be very specific. Don’t let the warm, fuzzy feelings of planning a marriage overshadow the importance of planning for successful parenting. You wouldn’t try to haul a loaded trailer without wheels. Having this conversation early is like putting tires on the trailer: It takes a little time but saves you a great deal of misery later. Do it for yourself and do it for your new family. Everyone benefits from the effort you make now. Isn’t that what being a parent is about -looking out for your family? The simple step of having a conversation before you walk down the aisle will go a long way to increasing your family bliss. Most couples miss this step.

If the kids already seem out of control then you need to talk soon. There is a great balance among parents. You will usually find that one is more stern than the other. When there is only one parent in the picture for a while and she is the more-permissive type, then kids quickly develop bad habits. It’s not uncommon for single moms to try to compensate for their children’s lack of a dad by giving them everything she can. She may find that telling their kids “yes” more than “no” makes her kids happy. Unfortunately this leads to a blowout when she has to tell them “no.”

A step dad who comes into this kind of situation should 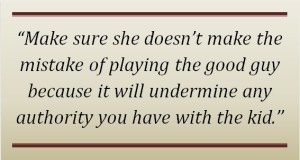 be ready for a lot of heavy lifting. The dynamic has to change but you can’t be heavy handed in your approach. If you can come to an agreement with the mom, then you can take a steady approach to changing the dynamic in the house. If you move too quickly with the kids you will risk alienating them, which might affect the way they bond with you. Kids who think someone is ruining their fun will quickly decide that person is a bad guy. You’ll lose their trust and it will make it nearly impossible to bond with them. Bonding as a family is vital. Read more about that here (in questions 2, 3,4 and 6).

If the kids think you are the big-hammer in the house they’ll soon find ways to work around you. It is vital that you and your wife are working from the same playbook and the kids don’t know you’re driving the changes. Make sure she doesn’t make the mistake of playing the good guy because it will undermine any authority you have with the kid. Getting a solid game plan together before you make changes –and sticking to the plan- is the key to success here. For her it will be a lot like learning to wash dishes all over again. She’s been doing it one way for a long time. Now she has to learn to do it a different way to assure you get the right results. If you want to be happy in your home you need to get her to sign off on the plan. If she’s not in you’ll have to get used to the way things are.