There’s an illness in our country that’s gone viral.

It used to be shameful to father a child and walk away. 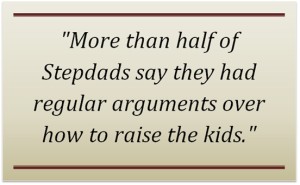 Now men do it in droves and their peer group thinks no less of them. When another man steps up to carry the weight left by the father, he doesn’t get the respect he deserves. The word “stepfather” conjures negative images in the minds of far too many people. Decades of ugly news stories about (a small percentage of) hateful and abusive stepfathers have created an unfair perception of this group of men; though most have noble intentions. This makes the already hard job of being a stand-in father- even harder… if not impossible.

Throughout history men have been Stepdads. Alexander the Great was a stepson and went on to rule one of the greatest empires. Steve Jobs, co-founder of Apple Inc was adopted and so was Bill Clinton. George Washington had two children –both step kids, adopted when he married his wife. Historically, when a man married a single mom, he became the father of the children. It’s only been in the past four decades that things have changed. Men who want the title of “father” without the responsibilities are a large part of the problem is. When a man marries a single mom today he often becomes a second-class citizen in his own home –and is given little say in how the kids are raised.

Most Stepdads Will Fail

The vast majority of these marriages are destined to end in divorce. Extraordinary pressure is a huge contributing factor. Biological fathers don’t have another man telling them how to be a parent. Stepdads do. Biological fathers have an influence from the first day of their child’s life (if they choose to). Stepdads don’t. We start with a family already in motion and do the best we can. To make matters worse, too many mothers don’t let Stepdads have a voice in the way the kids in their home are raised.

These results paint an interesting picture. Stepdads decide to either stand down to avoid arguments, or stand up for a different standard of raising the kids. If they chose the second option they sacrifice a certain amount of peace in their homes.

Stepdads who raise their kids as if they were their own are honorable for their effort –but they’re in a no-win situation.

1)      A man can raise a child from birth and have no legal right to adopt them without the consent of the father: Even if the father has never paid child support or even SEEN the child.

Why would any man willingly sign up for a job that’s this hard, where the game is so badly skewed against him?! He’d either have to be a fool –or truly care about the family he’s joining. Many (if not most Stepdads) are driven by love and commitment. Many don’t completely understand what they’re getting themselves into –so dive in blindly.

Single mothers are happy to have men become an add-on parent. They’ve been carrying the whole weight of parenting and are open to having extra help. Most divorced moms will re-marry within three years of divorce. The majority of never married single moms will marry within 2-3 years of their child being born. It’s the historic standard for a mother to seek a man in the home. It creates a sense of family. But for many mothers, that’s where it ends. Too many wives block their husband’s effort to raise the kids as father. The standards in the home are already set when the Stepdad arrives and he’s expected to adapt to those standards: In essence, not act as a father would act, but support the mother’s way of doing things. He’s expected to back her decisions and have little-to-no opinion about how the kids might turn out. Is it any wonder 2/3 of men walk away?