Posted by JoelWHawbaker on October 06, 2015 in Stepdads Blog | 0 Comments 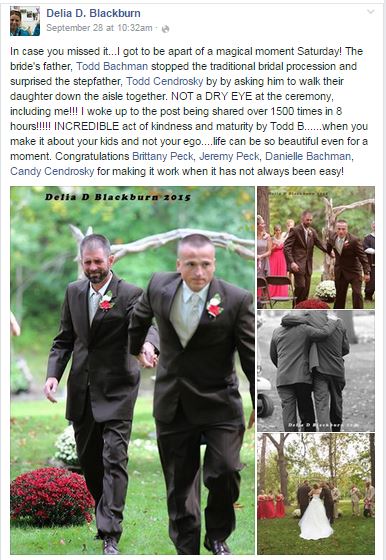 When wedding photographer Delia D. Blackburn agreed to photograph Brittany Bachman’s wedding she didn’t realize the amazing moments she would capture. When it was time to walk the bride down the aisle Britney’s dad, Todd Bachman paused and walked over the Brittany’s Stepdad Todd Cendrosky. Cendrosky has been Brittany’s Stepdad since she was 11. It was an emotional moment when the father led the Stepdad to the bride and they shared the symbolic moment together.

When asked why he did it Bachman replied (about the Stepdad) “He’s been to the choir concerts, the softball games… There’s no better way to thank him rather than just grabbing his arm and saying ‘common, let’s do this together.” Like so many other bio-dads and Stepdads, the two Todds didn’t always get along. “In the beginning it was very difficult.” says Bachman. “We’ve had our highest of highs and lowest of lows…”

Family court and parenting differences caused the normal struggles that come with raising a child between two households but over time the two men began to work as a team. Bachman says they learned to focus on the best interest of the daughter they share. “..over the last five to six years it’s all blended together..”

Stepdadding emphasizes putting kids first. Sometimes this means setting ego and pride aside so you can focus on their best interest.  Todd Bachman demonstrated this mentality perfectly. He explained why he decided to share the moment with his daughter’s Stepdad. “It was always about her -and especially on her wedding day… I thought it was appropriate to make her day that more special.”

In his interview with a local news channel Bachman gave some great advice about co-parenting. “If they can put their differences aside and concentrate on their children – that’s what it’s all about.”

This is a story that touches a lot of people. About half the families in North America have at least one non-biological parent. Blackburn’s photos of the wedding have been shared over 580,000 times. The images from the event have been seen more than 70 million of times.

Millions of kids in the US and Canada are raised without a father. But some are lucky enough to have two dads who love them. What could be more beautiful?!