What To Do When Mom’s Caught In The Middle

My 7 year old loves his new step-dad. You can tell. His attitude lately 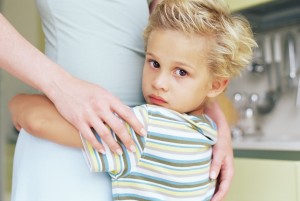 has been rough though and his  step-dad is trying to push through but takes it incredibly personal. He thinks my son doesn’t see him as a parent because my son gets an attitude and doesn’t listen to him sometimes. This is not the case. He is about to be 7 next week and he is testing his boundaries but I can’t seem to get that through to his step-dad. Suggestions? -Kayla

When kids are unhappy they don’t have the skills to understand or explain their emotions. As children, they don’t have any power. What they do have it the ability to act up as a way of protesting the thing that’s making them unhappy.

Your son’s behavior may be caused by any number of things. Maybe he doesn’t like sharing you with another person. He may be unhappy that things aren’t the same as they were before his Stepdad joined the family. If his biological father’s still in the picture he may be torn about liking his Stepdad. You may never know for sure the source of his behavior. But here’s the good news…  you have the power to help your son and your husband.

Stepdads leave at double the rate of biological fathers. Most who leave say they felt unappreciated, that the kids were out of control, and that they didn’t feel like an equal parent. More than any other person, moms have the ability to help Stepdads succeed.

How Moms Can Help 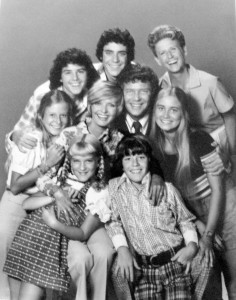 The Brady’s made it look easy

Kids are clever. They notice when a parent is more easy-going. They’ll exploit this as they get older. They also notice if one parent is stricter than the other. If it’s the Stepdad, the child will make assumptions about the Stepdad. When kids decide the Stepdad’s a mean guy it works against his ability to bond with the kids. When he can’t bond, it becomes very hard to become a family. So if you talk about the kids, do it where they can’t hear you.

The Stepdad has a tough job. Most that join a family already in progress have no previous experience as a parent. Even if they do, it doesn’t matter much. The rules are already established and Stepdads have to adjust to them. A situation is starting to develop where you and your son are in one corner and your husband is in another. Don’t let that happen. He should be part of the conversation when it comes to parenting. When couples work together they’re a team. When they don’t, they become competitors.

When we don’t take the time to fully define a Stepdad’s role in the family he has to make assumptions about what his wife wants. No matter how good his intentions are, he’s eventually going to disappoint her. If you haven’t done it yet, take the time to define his role as a parent. It’s not enough to simply say you want him to be a father figure.  We each have our own understanding of what a father is. Maybe his vision of a father is Peter Griffin and yours is Mike Brady.

It’s vital to define what you want –and to agree on it. This conversation can be tricky and it’s easy to leave important stuff out. If you’re not sure what the right questions are, use The Stepdad’s Guide. This will help you cover more topics, and will also improve your odds as a couple.

Ultimately it’s important that he knows you’re on the same team. Avoid doing anything that makes him feel minimized as a parent. He’s made a life-long commitment to you and your son. Respect and admire the enormity of that commitment. Most of us Stepdads are big-hearted guys. If we weren’t, we’d never volunteer for such a challenging job. You’ll discover that occasional words of encouragement and appreciation will be appreciated.