We Split Up – She Won’t Let Me See My Boy

I helped to raise my wife’s child of a previous relationship from the time he was 1.5 years old until he was almost 7. My wife walked out of the relationship after being unfaithful. She has not allowed me to even talk to him in several months and I seem to have no legal rights whatsoever because I never adopted him. It’s really tearing me up inside and I don’t know what to do – since he was basically my own son.- Jaimie23

Jamie,
I know your situation is hard. You care deeply for the boy and have poured yourself into his

upbringing. Like all good stepdads, you see the child as your kid. Unfortunately that’s not the way the law sees it. In the US and Canada there are few legal rights stepdads have. In the US the existing laws regard Stepdads to be ‘legal strangers’ to their step kids –even when married to the mother.

Mothers who deprive their kids from seeing the men who’ve helped raise them ignore the importance of the relationship. You’ve been a stand-up guy (maybe the only one the boy has had in his life) but she keeps you apart. It’s sad and he’s probably as confused as you are. It’s wrong that she did that. It’s cruel and selfish. Sadly –like all Stepdads- you don’t have a legal leg to stand on. I wish I had better news.

Sometimes Stepdads get lucky and their kids are older at the time of the divorce. Older kids have an easier time forcing the issue if they want to keep in contact with their Stepdad. Your son is young, so doesn’t have the leverage to move the issue much. It’s also less-likely he’ll make contact when he’s older.

I’m addressing this issue in my next book: What To Know BEFORE You Marry A Single Mom -and the statistics are shocking. 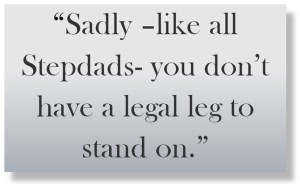 You’re not the first guy to be side-swiped by the legal realities of divorce from a single mom. A LOT of guys marry single moms without considering the big picture: And the big picture is painted in broad strokes.

Very Few Options
The most common situation I’ve seen (post divorce) is that the mom is used to having help from you so she will probably be open to letting you babysit. That may not be the case if she’s now with the guy she was cheating with. If she needs help and reaches out, that’s great because you get to see your boy. But it’s not perfect—because everything is on her terms. Now she has complete control. Be honest and ask yourself how long you’ll continue being a free babysitter. You may want to do what is best for your son but even if you’re the most honorable man and you can endure the situation—you’re still in bad position. The statistics say that about 75% of divorced women remarry, and most will do so within three years. You may get to see your boy, but there’s a 3 in 4 chance that there is going to be another father figure in the picture. If she remarries there’s no way of knowing how it will affect the way your son sees you. At his age he may bond with the new guy and may eventually lose his desire to see you.

I’m sorry for your situation. All you can do is walk away or try to negotiate terms with your ex to see your boy.