Stepdaughter Asks What To Do About Angry Stepdad

Dear Stepdad,
I’m not sure if you have ever had a question from a stepchild but I’m actually a stepdaughter of 17 years give or take. I’m just exhausted and not sure where to turn. My Stepdad and I have always had a rocky relationship. Mostly because his uniform response to frustration and stress is flying into a rage and yelling, screaming, insulting, dirty looks, threats, throwing things you name it. It isn’t all those at once but always yells. For things like a cup got spilled, (sometimes he’s the one who does it), someone left a glass in the downstairs, etc. You get the idea. He refuses to change this. I get the “it’s my house” response. Which I can appreciate that this is his house but I feel like I should get a certain baseline level of respect and consideration that any human being deserves. Am I crazy? Am I out of line for expecting that? I’m 25 now so ordinarily I could just not come around but I’m a single mom and had to temporarily move home so now I’m back in that environment again. Don’t get me wrong I absolutely appreciate they gave me a place to stay but when he gets like that it’s stressful and miserable. I’m afraid they are going to make me leave just because I don’t want to be yelled at. Please what can I do? –Vicktoryao 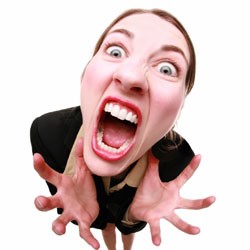 It sounds like your mom picked the wrong guy. You may have had to deal with his irrational behavior when you were a child, but now you’re an adult. The issues you’re dealing with at home aren’t yours, they’re his. He seems to be harboring anger about something and isn’t good at expressing it. Instead of talking about what’s bothering him, he lashes out.

Many wives block their (Stepdad) husbands from having a voice in the way the kids are raised. It’s frustrating to have your opinions disregarded. Because of this, many of these guys grow to feel like second-class citizens in their own home. This may be the issue he’s dealing with. Whatever it is, it’s his to resolve. It’s not your responsibility.

Your most important responsibility is to your child. Your mother’s home is not a good environment. Most Stepdads are good guys but this guy doesn’t make the list. He’s got a lot to sort out. Don’t continue to leave yourself open to his unkindness. Find a way to move out as soon as possible.