I’m the mom of two amazing girls, and recently remarried a wonderful guy who was never married before and has no children of his 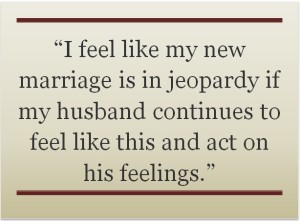 own. He stepped into the role of Stepdad knowing my oldest (15) has issues with depression and cutting, and my youngest (10) is still grieving the day her father left us five years ago. Their bio-dad is still in the picture, but very irregular with his visits; he sees them about one weekend in six, and rarely calls the girls. He keeps in touch with the oldest online with little quips and smug advice on how to be happy. Anyway, my relationship with him is tolerable at best, but I do everything in my power to get along and “co-parent” to benefit my kids. My new husband is truly a “dad” to my kids in so many ways: making lunches, carpooling, bandaging cuts, soothing hurt feelings, laughing and joking with them, going to parent-teacher meetings and participating in family therapy for our oldest. He’s 100% committed. The problem I’m experiencing is his ongoing dislike of my ex and his need to “outshine” the bio-dad. When my ex wants to see the kids, my new husband resents it terribly and puts me in a horrible position of almost defending my ex and his relationship with his kids. Yes, I know he isn’t a great dad, but he’s STILL their dad and they want a relationship with him; holding them back from that will only serve to bite us in the behind later on…but my new husband can’t seem to get that through his head. He tells me I’m defending my ex or giving in to what my ex wants, and I feel pulled between what my husband wants and the rights of my ex. When I try to explain, he gets very passive aggressive and pulls away from me and the kids. I know he’s hurting, and I don’t want that. I tell him so often how much I appreciate his role in our family and everything he does for us, but it doesn’t seem to be enough. It’s like he wants the kids to choose him over their bio dad, but I know they won’t, and they shouldn’t have to. I feel like my new marriage is in jeopardy if my husband continues to feel like this and act on his feelings. Please help 🙁  -Rae

Is the Stepdad in your house the odd man out?

You’re facing a pretty common problem. Your instincts are right. The kids should never have to feel they need to choose. It’s great when a Stepdad feels a strong responsibility for his kids. That’s a great instinct. All parents should feel that way. Unfortunately, there can be a downside when a Stepdad feel this way. He wants to shield them from pain or danger, but they can’t be shielded from their father –even if he’s not a great guy. Sadly, you can’t protect your kids from everything -and it’s especially hard to shield them from something the’re drawn to.

Your husband obviously loves the kids a great deal. Having a daughter with emotional challenges is hard on any parent. For him to take that on and be actively involved in her treatment says a lot about his character and underlines his commitment to the family. It’s great that you’re showing him your appreciation. Even if he doesn’t say it, that means a lot. His intentions are good but he’ll definitely do better by the girls if he can adjust his approach. 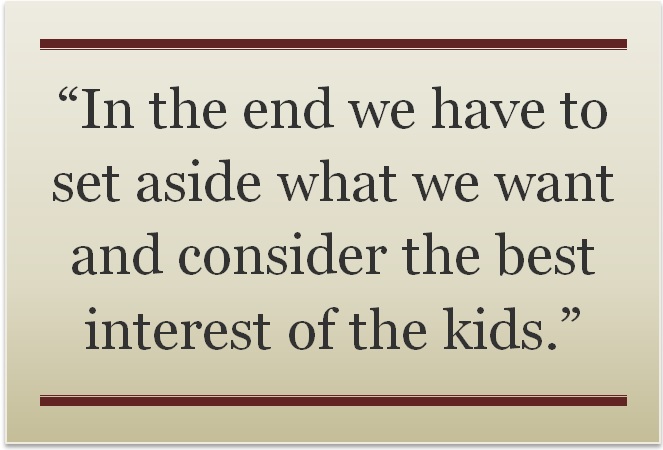 Unintended Consequences for the Kids

Unless the father is a true threat, it’s important for Stepdads to not block the father’s access to the kids. Most parents will react if they feel they’re being kept from their kids. The emotional reaction is understandable, but in a co-parenting situation the kids are caught in the middle when battle lines are drawn. That’s a bad position to put them in. It will create more turmoil for the kids in the end. Fathers who feel threatened by a Stepdad will react. Many will try to drive an emotional wedge between the kids and their new parent. He may talk the Stepdad down to the kids or say things like “I’m your real dad.” If a father acts this way it plants seeds of guilt in the kids. They ultimately feel they can’t be close to their Stepdad without betraying their father. This is an emotionally abusive thing to do, but some fathers don’t consider that. They just react. There are some simple steps the Stepdad can take to keep things from getting worse:

Kids will naturally seek the approval and love of their father. It doesn’t matter if he’s a bad guy, they want to be accepted by him. A fact of human nature is that we’re drawn to the things we know we can’t have, so expect them to gravitate toward their father if he becomes more distant. The girls need to find out for themselves what their father is really like. They can’t be told. They’ll eventually decide the kind of man he is. It will be hard if they realize they aren’t important to him. They’ll need a strong father figure to look up to. That’s your husband’s job –to be there.

In the end we have to set aside what we want and consider the best interest of the kids. Being a parent can never be a popularity contest. Kids learn more from our actions than they ever do from our words. Stepdads have to set the right example and let the kids learn from our actions –as well as their father’s. The kids will make up their minds when they have enough information.

You’re smart to identify this problem early. It’s important to start talking about it with him early  -when it’s just a ripple. Ignore it and it could become a wave that engulfs your family. If you can’t find a way to get the conversation started, consider seeing a marriage counselor. Too many people only seek a counselor when a problem is too embedded to fix. Look for a marriage and family counselor who specializes in communication. Seeing one early will help improve the way you communicate as a couple. It should also give you the tools to find common ground. Seeing a counselor before a problem is fully developed is a lot like changing the oil in your car: You’re preventing things from falling apart further down the road.

For more information on improving Stepdad communication with the father check out this article on the topic.