She Lets the Kids Run Wild, What Can I Do?

Ok first off I married a lady with 4 children. g15, b 13, b 9, b 7. The two little ones… not that big of a deal right now. The two others would make me pull my hair out.. if I had some. The b 13 wants and gets from his grandparents. Right now he has a broken arm. He was out riding it with his moms permission last night. I feel that he should have not been out riding it at all. Most of the time I get on him they don’t listen to me -plus he is spoiled even when he gets in trouble. It takes their mother yelling at them for them to get anything done around the house… The g 15 she believe that she cannot do anything wrong. Her mom told her to turn over her iPod on Sunday. Well last night I asked for it again then told her that it needed to be handed over tonight. Two hrs later she still clams it is at her cousin house and they could not find it there, just after coming home from the beach on Sunday with her aunt.
The two oldest ones do have much to do with their father but only when they want something from him…the two younger ones will go and visit with him just about every weekend. He gets a few hrs with them.
My wife is more of the laid back type of parent and I am more by the restrict type.
She also feels that letting her 13 an 15yr old stay out past 1 am is ok when they don’t want to listen.. 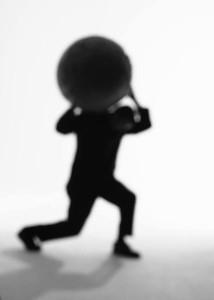 I am a bit torn with loving her some much and dealing with spoiled brats at the house… right now my trust level is not very well with the kids. I need help and fast. –ASH

Thanks for reaching out. In mythology, Atlas is said to have carried the weight of the world on his shoulders. As a Stepdad its vital to know how much weight you’re willing to carry –and for how long. It’s also important to be realistic about who you’re married to. When you’re surprised by her actions you don’t really know her. Try to step back from the emotional connection you have with her and consider the entire picture. Love is a good thing, but it’s not enough to keep you together when you feel powerless in your own home. The problems you’re dealing with can only be fixed by working together as a team.

Let’s look at the issues.

You’ve walked into a challenging situation. Small children can be a lot of work but kids between the ages of 13 and 18 are a handful. Puberty and other factors are to blame. This age group will push the boundaries and test the limits. They’ll question your authority and they’ll push for more freedom. They will happily take advantage of a parent who is permissive and doesn’t punish when they break the rules. Kids in this age group will work against a parent who tries to take away the level of freedom they’ve achieved. She’s created a dangerous situation for the kids. You want to be a responsible parent. If she’s not working with you she’s working against you.

No kids should stay out until 1am. The legal system considers it child endangerment when a parent knowingly allows it. If the authorities knew this was going on the kids could be taken away or she could lose custody to the father (if he’s still in the picture). It’s not only illegal; it’s bad parenting because it allows the kids to be exposed to dangerous situations. You show more concern for these kids than she does. This should worry you. It says a lot about the person she is. When a mother is reckless with her kids she’s nearly always reckless in other important parts of her life. Consider what other reckless behaviors she has. Emotion might be blinding you to her true character.

Parenting requires equal participation. You disagree with the way she handles the kids, but you’re new to the family and they’ve already settled into a pattern of behavior. From the kids’ perspective, this is the way they’ve always done it. Even well-disciplined children will push back when a Stepdad tries to change things up. These kids are used to having a great deal of freedom and very little very little supervision. It’s human nature to resist giving up 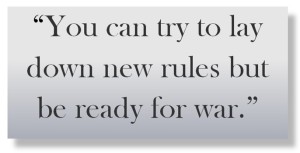 what you already have. Kids resist even harder because they don’t have the wisdom to understand why they’re losing privileges. You probably won’t be able to change the mom’s way of doing things, but even if you do, expect a massive backlash from the teens.

To change the situation: 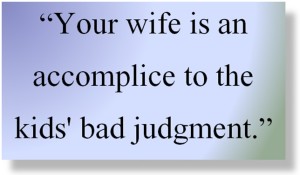 or because she feels it’s too much work dealing with older kids. Teens are a whole different level of work little kids. Moms like the hugs and affection of little kids but aren’t as well-equipped to handle it when their babies grow up and defy them. Many single moms just give up, thinking that as long as the kids are happy they’re doing their job okay. In reality, she probably won’t change, or –if she does- she won’t stick to the plan.

You can try to lay down new rules but be ready for war. When you force the issue it’s easy to be painted as the “mean parent.” She will be seen as the “nice parent.” Even if she does play along be ready for a house full of very unhappy kids. There are few things more frustration than a teenager throwing a tantrum. Your wife is an accomplice to the kids’ 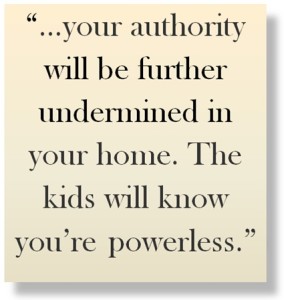 Many moms will also reflexively try to play mediator in these situations. Some will have an instinctive reaction to protect their kids when they complain they’re treated badly. So far she’s shown a weak resolve against the kids, so it’s a safe bet she’ll continue that behavior. There’s a good chance she’ll work against you and try to appease them instead of standing firm as a parent. If she makes concessions to the kids behind your back the situation will get worse. The children will know she’s the go-to parent when they want something and your authority will be further undermined in your home. The kids will know you’re powerless.

If this is how she handles the kids now, expect your home life to get worse as the kids get older. Kids will become as undisciplined as you allow them to be. Once you’ve given them the power it will take an enormous effort to get it back.

Your options are limited. You can try to persuade her to work with you and hope it works. You can accept the situation as it is, or you can break up. If you don’t think she’ll change her parenting style cut your losses. Leaving will save years of frustration and save the younger kids the emotional pain of bonding with –then losing- another parent. Run (don’t walk) to the nearest exit. I can’t see a scenario where this goes well for you,