My daughter’s Stepdad gets to walk her down the Aisle – What can I do?

I divorced my kid’s mom when she was 8 and now she’s in her late 20’s. Her mom got together with her new husband when my daughter was around 16. The truth is I didnt pay enough child support and me and her aren’t close. I wasn’t really there and I hardly ever chipped in like her mother and stepdad did.
I know she’s embarrassed by me. She’s closer to her stepdad and tells him stuff but doesn’t have that same way with me. Now she wants him to give her away at her wedding. What should I do? – REALdad

I’m sure this has to be a frustrating time for you. In your eyes she’s your daughter -period! There is no gray area for you. But you have to understand that with kids, there’s much more gray area. Her reality is you aren’t her “dad”, but her “father”. As an eight year old when you and her mom split, she had bonded with you. Bonding is what makes any relationship strong.  But she felt you turned you back on her and in her heart, that bond was damaged. Her feelings were hurt and she had no power to help herself with it. Only you had that power, but you weren’t there. Now she carries the pain of a hurt little girl into her adult life. As an adult she has the power to respond to that pain. She wants to leave it behind.

Since she was little she’s had certain expectations of you that she feels you haven’t fulfilled. You already understand that. But don’t think this is about the money. Kids care nearly nothing about child support. What she wanted was bigger than that. She wanted you to be in her life in a meaningful way.  You weren’t. You had different priorities that you put above spending time with your daughter. Her Stepdad filled that void and he’s been there when she needed a father figure the most -as a teen. Asking him to walk her down the aisle is her way of letting him know that. It’s her way of acknowledged his commitment and sacrifice. It’s her way of thanking him for helping her heal.

Your daughter is a grown woman now. She’s not a little girl with longings for her dad, 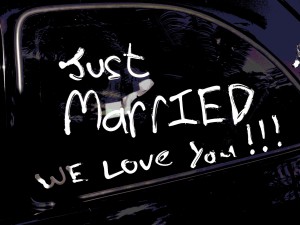 but there still might be a chance for you. This is an opportunity to do the right thing. If you can muster it within yourself, be excited for her. Her wedding day is all about her. It’s her big day and it shouldn’t be tarnished by anything. Don’t do anything to ruin it –but also don’t toss it aside just because your feelings are hurt. Her feelings have been hurt for years and she had no power to change it. You’ve had the power to be there, but weren’t.

This is your chance to rebuild. If she didn’t invite you then don’t show up. She doesn’t want you there. Just sent a present and a card letting you know how proud you are of the woman she’s become. That will mean something to her, even if she doesn’t acknowledge it. If she’s invited you then show up. Act like a proud father. Be exited for her and smile when she says “I do”. She may allow you to grow back into her life. Someday she may have kids and you might have another chance at it. You may have the opportunity to be the kind of grandfather you would have wanted. But remember- that takes commitment also. If you can’t do it right then don’t even try. You don’t want grand kids who feel their granddad doesn’t care.

To be a father you just have to help to create a child. It’s a hard lesson, but it’s one worth learning from. You’ll be a wiser man for it. You can learn from your mistakes if you choose to. Don’t allow yourself to take this injury personally. It’s self-inflicted.