My Teenage Daughter and Her Stepdad Are Fighting

My husband and I have been married for 5 years. At first, he and my daughter got along fine. But for the last couple of years, it seems like they are constantly bickering. She’s never happy with the way he does anything, and whenever she criticizes him, he yells at her. He bends over backwards for her most of the time, and I think sometimes she takes advantage of him. Most of the time I think both of them are wrong and their arguments could be avoided. She’s been having problems with her biological dad and only sees him once a week. And now she’s having problems with her stepdad and I feel like my only choice is to take her and leave. I don’t want to do this. I want to fight for my family, but I don’t know how much more I can take feeling like I’m stuck in the middle. I’m going to try having all three of us sit down to air out our grievances, but I don’t know what else I can try…I just feel stuck…please help me. 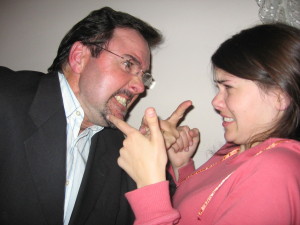 This situation isn’t unusual. But the problem isn’t your daughter, it’s the parents. Having a sit down to let her air her grievances won’t fix the issue. She’s acting up for a variety of reasons related to:

When kids are sad or hurt they don’t have the skills to understand or share their frustration. They don’t have the power to change the thing that’s hurting them so they do the only thing they can; they act up!

But there’s something else going on here that can change the situation for the better. Your husband and you missed a key step when he joined the family. His role wasn’t defined well enough. When couples don’t handle the important communication well at the time they become a family assumptions are made (by both people in the relationship). When this happens it’s a little like an actor who doesn’t have a director. He will perform his role the way he thinks he’s supposed to. When the Stepdad gets bad results he usually gets push-back from his wife. Then the Stepdad starts to feel unappreciated, which can make him react badly to his wife and (sometimes) his kids.

When feelings get hurt you begin to withdraw from each other. The stress starts to effect other parts of your relationship, like your love life and the quality of time you spend together. Your passion for each other starts to erode. This creates even more hurt feelings and it begins to snowball until one (or both) of you thinks of quitting out of frustration. Sound familiar?

Most new Stepdads have never been a parent and have to learn immediately how to do it. Most assume they know how but they’re wrong, Stepdad stress is so high that they leave at twice the rate of traditional fathers. If you’re starting to thing of ending it, changes are so is he.

Nearly all of the couples I work with have this issue at the root of their current family struggles. But there’s good news. It’s not too late to fix the problems that are starting to crop up. This takes time and good communication. There’s more than I can cover in an article. I wrote the book The Stepdad’s Guide – Resolving Family Conflict to deal with this very issue.

You can read more about the communication challenges here. If you need more help it may be time for couple’s coaching. A few sessions can often make a huge difference in many relationships. You can get your initial consultation for just $25. I can usually sort out the best plan of action in this first call.

I know it’s frustrating but there’s still time to fix it.