Letter from a Father -Her New Guy is Horrible, What Can I Do?

I am a bio father and my wife cheated on me with our chiropractor. We have divorced since and I can’t stand this guy. He knew she was married. He knew she had kids and I was his patient too. So he knew me. This is what makes him a bad person. He knew what he was doing was wrong, continued to go down that path. I do not want someone like this in my kids’ lives. This guy is garbage -a real piece of s__t. He falls under a different category than these other men. What can I do? He wants to be nice to my kids but I do not care. I can’t stand him. I tell him off whenever I see him. –Kevin

You were dealt an unfair hand. You’ve got a lot of anger right now and I understand why. You married a woman who was weak. She found a man who was just as weak and then betrayed your trust. In the process you’ve lost a lot of faith in people. You’re angry and you wish you could get payback. There are ethical standards Chiropractors are held to. You could easily file a complaint against him with the American Chiropractic Association (ACA) if he’s in the US. The penalty would probably not be more than a warning and possibly a fine.  As tempting as it might be to get payback, there’s something more important than your need for revenge: Your kids.

I know you must be hurting. You’ve been betrayed by the person you thought you could trust most -and you hold him responsible. 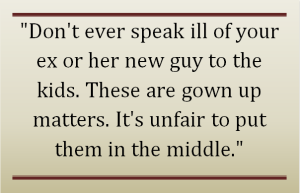 You need to let go of your hatred for this guy. By continuing to let your hate boil inside you allow the two of them to control your happiness. You have to let go of that if you want to feel whole again. Yes, you’ve been victimized by  the situation, but the kids have been hurt more than you. They have no control over the situation and they don’t have the ability to make sense of their family breaking apart. For young kids the emotional impact of divorce can be as devastating as the death of a family member. Do everything in your power to minimize their pain. The first step is to let go of the hate. Make it better. Do nothing that might make it worse.

The kid’s best interest at the center of all decisions you make now. Your needs are second. As hard as it might be to see this guy, you’re going to have to swallow your anger and play nice. It might feel good to yell at him but your kids could pay a price for your anger. Hearing you telling him off is emotionally difficult for them; they won’t understand the big picture- they’ll only understand their dad’s mad. They are already hurting because their parents aren’t together anymore. Don’t add to their pain by letting them hear you angry.

You are in a great legal position. You are the biological father and have rights. Be strategic or you could see those rights reduced. 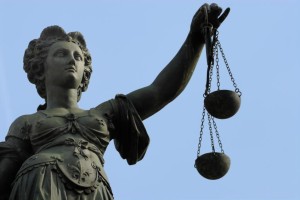 Continuing to yell at the guy she cheated with will give your wife all she needs to reduce or limit your contact with the kids. If you raised your voice or say something that sounds threatening all they have to do is file a police report. Once it’s on the record they can use that against you. She can easily argue that you’re dangerous and even file for a restraining order. Custody is like a game of chess, all they have to do to outplay you is not yell back. Be smart, don’t risk contact with your kids because it feels good to vent your anger. This is a game you need to win.

Accept That it’s Over

Winning doesn’t mean you get your wife back. Do you even want to be with a woman who would do that to you? She’s the mother of your kids, so you need to work with her, but you’ll never regain the respect you once had for her. Accept that it’s over. It’s an important step to getting past your anger. Understand that you have a right to be with your kids and be an influence in their lives. Right now they need that. They are confused and need to know their dad is always going to be there for them.

If you’ve read any of the letters on Stepdadding you already know it always comes down to what’s best for the kids. You have to make all decisions based on the K.I.D. Standard: Kid’s Interest Decides.

The K.I.D Standard is a simple formula: When you’re doing something related to the kids stop and ask if it’s in their best interest. Determine your actions based on the interest of the kids.

b)     If you’re about to tell the kids what a miserable person her new guy is consider if it will have a positive impact on the kids, or if it can have a negative impact. Then do the right thing. Pretty simple, right?

Remember that you need to have a working relationship with your ex. You need to handle the kids together as a long-term project. Be the best dad you can be –even if it means swallowing your pride and putting away your anger. It’s all about the kids. This change can’t

happen overnight, but it can begin today. The first step is to start embracing the right mentality. You love your kids –so put them first. Remind yourself “I love my kids and I will do anything for them.” A good man will shield his kids from danger. That’s what you’re doing now, but the danger isn’t physical – it’s emotional. Your ex has already put them through a lot of misery by destroying their family. You can’t change that, but you need to be strong enough to shield them from more sadness. 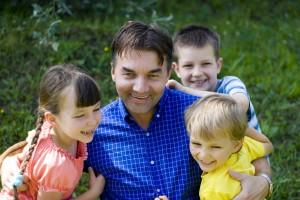 I’m sorry you’re going through this. Being betrayed like this has got to be one of the most miserable things a guy can experience. At this point you’re starting a new chapter. It can be scary. Keep your kids at the center of your life and keep their needs at the top of your list. Be the best dad you can be –and never let them doubt how much you care about them. As long as you’re there for them you can never be replaced by another. It’s going to be challenging but you can do this!