Husband Wants Kids to Choose Him Over Bio Dad -What Can I do?

I’m the mom of two amazing girls, and just recently remarried to a wonderful guy who was never married before and has no children of his own; he stepped into the role of step-dad knowing my oldest (15) has issues with depression and cutting, and my youngest (10) is

still grieving the day her father left us five years ago. Their bio-dad is still in the picture, but very irregular with his visits; he sees them about one weekend in six, and rarely calls the girls. He keeps in touch with the oldest online with little quips and smug advice on how to be happy. Anyway, my relationship with him is tolerable at best, but I do everything in my power to get along and “co-parent” to benefit my kids. My new husband is truly a “dad” to my kids in so many way: making lunches, carpooling, bandaging cuts, soothing hurt feelings, laughing and joking with them, going to parent-teacher meetings and participating in family therapy for our oldest. He’s 100% committed. the problem I’m experiencing is his ongoing dislike of my ex and his need to “outshine” the bio-dad. When my ex wants to see the kids, my new husband resents it terribly and puts my in a horrible position of almost defending my ex and his relationship with his kids. Yes, I know he isn’t a great dad, but he’s STILL their dad and they want a relationship with him; holding them back from that will only serve to bite us in the behind later on…but my new husband can’t seem to get that through his head. He tells me I’m defending my ex or giving in to what my ex wants, and I feel pulled between what my husband wants and the rights of my ex. When I try to explain, he gets very passive aggressive and pulls away from me and the kids. I know he’s hurting, and I don’t want that. I tell him so often how much I appreciate his role in our family and everything he does for us, but it doesn’t seem to be enough. It’s like he wants the kids to choose him over their bio dad, but I know they won’t, and they shouldn’t have to. I feel like my new marriage is in jeopardy if my husband continues to feel like this and act on his feelings. Please help 🙁  -Rae

You might be surprised to know that’s a pretty common problem. It’s great you’re showing your appreciation. Even if he doesn’t say it, that means a lot. One of the primary complaints of Stepdads is they feel unappreciated.

Your instincts are right. The kids should never have to feel they need to chose. Your husband obviously loves the kids a great deal and he’s dealing with a challenging double-standard.  A loving father is protective of his kids -especially daughters. This reaction has primal roots. If a bio-dad is protective it’s a good thing. If a Stepdad is protective it’s also good… but it can be a problem when he’s protecting them from their father. It’s tough to see your children hurt by the person they seek approval from the most. That’s what he’s struggling with. All dads (including Stepdads) have to eventually realize we can’t protect our kids from everything.

He’ll eventually find he can’t do battle with the father. There’s way too much down-side. 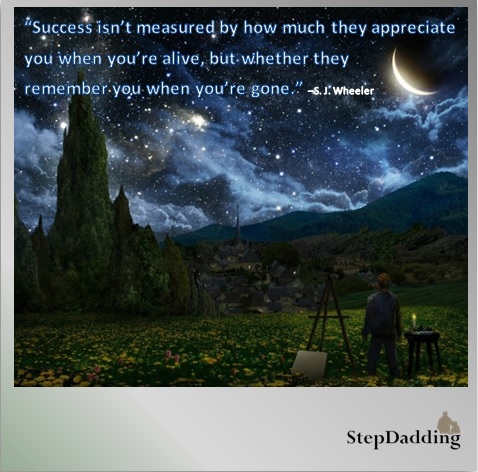 The father can use the Stepdad as a scapegoat by claiming he would have seen the girls more if the Stepdad hadn’t blocked his efforts. The girls need a strong father figure. Your husband is that man. He’s more committed than their father but he’s at a disadvantage because he has to play by a different set of rules. Being a dad isn’t about winning -it’s about being a man your kids can count on. He needs to be a rock for them when they need him, but also accept they need to find out on their own who their father really is. In time they’ll make up their minds about their two dads. If he’s a good man they will eventually have a great appreciation for everything he’s done for them.

You’re smart to identify this problem early. If it’s starting to cause a rift and you can’t find a way to get the conversation started, consider seeing a marriage counselor. Too many people only seek out a counselor when a problem is to embedded to fix. Seeing one early will help you both communicate better. It should also give you the tools to find common ground. For you, seeing a counselor will be like changing the oil in the car: You’re preventing problems from popping up further down the road. Sell it to him like that. He’ll probably understand. You’ve got a good man with good intentions. Find common ground and you’ll make it through this.