How Do I Work With Her Unreasonable Ex?

I am looking for a legal way to keep my 7 year old step daughter this weekend. Normally it would be the bios weekend but this weekend 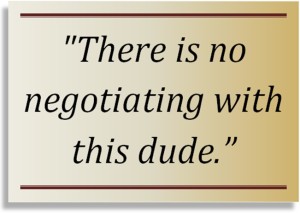 is her sisters 13th birthday and we have an overnighter planned. We originally proposed to the bio dad that he keep her Friday to Saturday afternoon. We would pick her up Saturday afternoon to attend the party and continue with the every other weekend agreement. He would rather keep her Friday, have us pick her up Saturday at 3 and return her after 4 hours at 7pm. After very difficult text negotiations and having to explain every detail of how a birthday could be celebrated on two different days, he begrudgingly agreed to let us pick her up on Saturday but now he insist we bring her back at 3 on Sunday only for him to drop her off by 6 Sunday evening. My wife asked why the need to have her on Sunday and that was enough for the bio dad to end all negotiations and he finished by insisting the 7 year be dropped of Friday and he will drop her back off on Sunday. Even had the nerve to finish the phone call a “you heard what I said” and hung up on my wife. There is no negotiating with this dude. –Steve

One of the greatest challenges Stepdads face is mastering the art of diplomacy. It’s important to be able to work with the biological

father. When the parent groups don’t work together, the kids suffer. When things aren’t working and they seem to be getting worse it’s usually hard to remember where it first started going wrong.

Most relationships end badly, and many couples have left over animosity that doesn’t fade away. Many Stepdads walk into a situation that’s already toxic. If she and her ex are at odds it’s especially challenging to develop a working relationship with him.

It’s easier to work on it early. The longer you wait the bigger the communication gap becomes. If the relationship with her ex doesn’t improve it will probably continue to erode. It can easily become a cold war, where people start making their point through passive-aggressive behavior or worse. In the end, you’re left with a situation where you have to decide what’s important enough to fight over. Ultimately the parent groups are grumpy with each other and the kids pay the price.

These situations are tough –but they can be fixed. Feelings are hurt on both sides. Each parent group has slowly backed away from constructive communication. Now someone has to step forward. Who’s going to make the first move? If nothing changes the biological father will continue working against you and your wife –alienating the child against you.

Parental alienation can have terrible effects on a kid. It will also make it much harder for you, as a Stepdad to improve your relationship with the child –and bond as a family unit. One birthday party isn’t worth burning what’s left of the bride over. It’s important to take the high road. Don’t speak badly about her father. You don’t need to. If you take the high road and the father is bitter and angry, she will see the big picture eventually. If her dad deprives her of a birthday party she’ll know it was wrong. Most importantly -thing need to change.

Someone’s got to step up. Someone’s got to try to change the tone of the adults. You can let this one incident further damage your communication with the father or you can 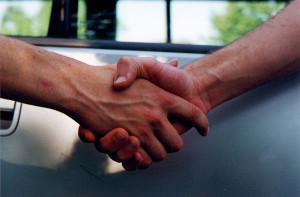 use it as an opportunity to reach out. Let him know you understand he must have his reasons for wanting to have his daughter at his place, but you’d like to build a better working relationship with him. Let him know you feel the fighting among the adults is making it hard on his little girl. Ask him if he can recommend ways you can all work better together.

Leaving it open like this will give him a reason to let his guard down and open up. He’s vulnerable too. His emotions are also tested. You need to find a better way to handle the situation. But nothing will happen until someone has the strength to reach out and make a gesture of good faith. You don’t have to like him, but for your little girl’s sake, you need to learn to work with him.

You can read more about building a bridge here.

Watch this video to learn more about working with the bio-dad.