I have been a Stepdad since August. At first things were really good with me and my step daughter. Her father is around more often since me and my girlfriend are expecting. She’s 5 and usually super nice but whenever she’s out with her dad she comes back and either ignores me or gives me attitude. The weirdest thing is that after a while she wants me to play with her & read her stories etc. For example, yesterday she came back home with a Mario doll and I told her the doll’s name because she didn’t know the character so she eyed me like if I had said something wrong. Her mother asked her what was wrong… why she did that. All she did was change the conversation. But like 30 minutes after that, there she was knocking on my door to help her set up a new toy she got. At times I feel like I’m being taken advantage of. How should I handle this? -Junior

There are a few things going on here, but only one you have control over.

A new man in his child’s life can make a father jealous and vulnerable. You know how men are with emotion. Her reactions to you are probably more about her trying to sort out her father’s reactions and words than anything else. Men don’t always know what we’re feeling; we just know something’s eating at us. When she talks about you, her father may be reacting to it in a way that confuses her. His reaction to the topic could be as simple as reminding her she’s his little girl. 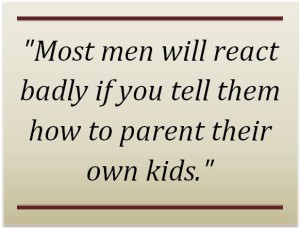 Some fathers will say things like “I’m your real dad.” and not consider that it’s a bad idea. It’s an accurate statement, but it’s also confusing to a little kid. Kids don’t worry about whose “real”… they only care about whether you’re a nice person. Fathers often feel uneasy about another man in their child’s life.

A five your old doesn’t have the emotional development to understand how to react to adult concepts like biological vs. non-bio parents. She’s picking up on enough to be confused about it. She may even understand he wants to make sure she knows he’s his little girl. Her strange way of acting when she gets home are a symptom of her confusion. Since he’s just five she doesn’t have a very big attention span, so she quickly shifts gears and goes into play mode. That’s good. It also tells you she likes you. Kids won’t play with someone they don’t like.

Now, on to the one thing you do have control of. It’s obvious you love this little girl. If you didn’t it wouldn’t hurt when you feel rejected by her. You’re the best kind of Stepdad. You’re an honorable man who isn’t afraid to take on the tough job of being a parent to another man’s child. Be proud of that and keep moving forward. Here’s one magic move most guys miss: don’t worry about being “dad”. Instead adopt the attitude of being her “parent.” It doesn’t matter what she calls you. She just needs to know you’re there for her. She needs to know you’re a man she can count on and look up to.

When she acts odd, take the time to talk to her about it. Get down on her level. Don’t show negative emotion; just say “Is everything okay? You seem like something’s bothering you.” She may or may not know what’s making her act that way, but at least she’ll feel safe if she wants to talk. Give her a hug and tell her you missed her when she was gone. 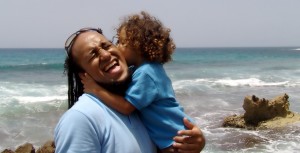 A hug fixes most things for a five year old.

Don’t try to confront her dad. He probably doesn’t even understand what’s happening. Most men will react badly if you tell them how to parent their own kids. Talking to him will almost surely make him defensive. That should be a last resort. Instead, help him drop his defenses, using the techniques in this article and video. If he knows you’re not trying to replace him he’ll stop the behavior she’s picking up on. Start building a working relationship with the bio-dad. It’s vital that you learn to work with him early, for your little girl’s sake.

Remember, she doesn’t even know why she’s reacting the way she is. If you and your wife stay consistent with how your respond to her things will be fine. Be ready for her to come home from her father’s house a little different. Even if everything is normal, she’s been in a place with a different set of rules,. It’s normal she’d need some time to readjust. Be patient and keep being the best parent you can be.