My wife and I have been married for about a year and her ex is a huge pain to deal with. My step kids –a boy and a girl- are both less than seven. This guy pays almost nothing for child support and makes every visit miserable for my wife (and me).  He seems to be a major control freak. Everything has to be done the way he wants it- when he drop them off, when he picks them up and sometimes even how long he decides he’ll keep them. He picked them up today and, as usual was a complete jerk about it. He doesn’t give us any notice some times on the days he comes to get them. It’s his day but a little heads-up would be a nice courtesy. My wife is always stressed out before he gets here and she’s stressed out the entire time the kids are gone. Then we almost always get into it with him when he brings them back because he’s so rude in the way he acts. I dread the weekends he has the kids because I know it’s going to be drama. Last week I made an excuse so I wouldn’t have to be home when he came for the kids. I want to do that every week because I don’t want to deal with this A-hole. I don’t know if I can continue to stay in this situation. DO you have any advice on how to deal with a guy like this?  –ArtJSN66

Many Stepdads report that the worst part about the job is the ex-factor. If you’re dealing with your wife’s challenging ex, then you’re in good company –and you’re not alone. I’m sure many of the dads in the Forum will have some nuanced advice so I recommend you pose specific questions on this topic there.  For the moment, let me talk about the situation you’re dealing with.

First: Let’s look at the legal aspects of your situation. 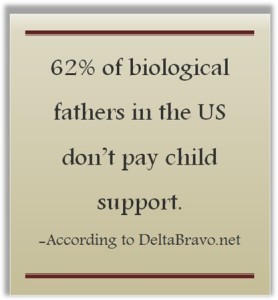 You mentioned that the father pays “almost nothing” in child support. If this is what the court ordered then you’ve got to be glad he pays it. You might be surprised to know how many men don’t pay anything. Deltabravo.net states that 62% of biological fathers in the US don’t pay child support. It’s reported in divorcemag.com that 74% of Canadian dads with a child support order are generally in a state of arrears (meaning they are not up to date in their payments).  The article on deltabravo.net goes on to claim that most mothers don’t even seek child support, so the statistic is flawed. In fairness of full-disclosure, the article was sponsored by S.P.A.R.C., which is an advocacy group for dads. They report this information as factual but they don’t support the statistic (about mom’s who don’t want child support) with a source. I feel comfortable sharing it because I’ve known plenty of single moms who haven’t asked for support. So there’s surely a good deal of truth to it.

There’s sometimes compelling reasons not to ask for money.  Here are some I’ve seen

3) It may make him angry. She fears retribution

In a case where you feel a father isn’t paying enough and he isn’t giving enough heads-up when getting the kids and is keeping the kids longer that he’s allotted, then you can have your wife take it to the local District Attorney.  This is the title in most US states. It is probably a different title in Canada. The D.A. can bring it to a judge to reassess the amount he is paying. While this may increase the amount you are getting for the kids and stop the bio-dad’s bad habits with the kid’s visits, it will not help to improve his overall disposition towards you and your wife. If money isn’t really that tight, I’d suggest focusing instead on getting along. A strong working relationship with the bio-dad will strongly benefit the kids’ level of happiness. Building a bridge will also help reduce the stress in your home. What you gain will be much more valuable than the few hundred dollars of child support.

The hard truth of being a Stepdad is that you don’t just marry the wife, 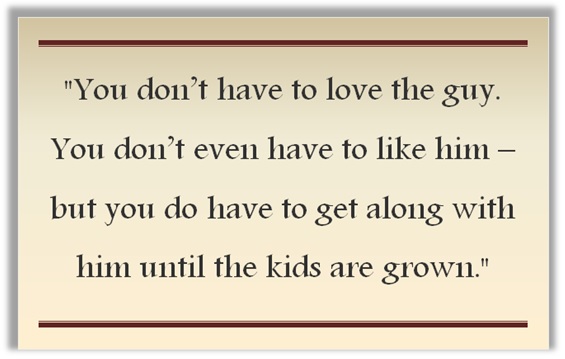 you marry the entire situation. Few men fully understand what they are getting into when they marry a single mom. While no two situations are the same… you’ll be hard pressed to find a Stepdad who says it’s “easy.” There are emotional and psychological dynamics that were in play before you even entered the situation. The kids may be torn by their parent’s split up and feel like they have to choose. Your wife and her ex certainly didn’t separate because they got along too well. It’s would be surprising if they were excellent communicators now. Emotions are high and now the father sees another man stepping into his role in the home. There is a very primal thing at work here and it is territorial in nature. Bio dads can feel like the kids belong to them and that the presence of another man in their lives can be frustrating at best.

In most cases biological fathers don’t handle themselves as well as they might. Take a moment to consider how you might feel in his place. If your kids were being raised by your wife and another man who is now the person they interact with in a dad role most often you might feel emotional about it. Men, as you know aren’t known for handling their emotions well. There are plenty of cases of dads who are pushed to the brink when dealing with emotional matters. In 2011 a man shot eight people in a Seal Beach, CA salon, including his estranged wife. The man was in a bitter custody battle with the mother. Luckily, most men handle themselves better than that but it’s important to remember that he is probably struggling with a lot of emotion right now. His rude demeanor and controlling behavior are probably a sign that he’s trying to have some control over a situation where he feels powerless.

If you can muster the internal strength and swallow a bit of pride, asking him to 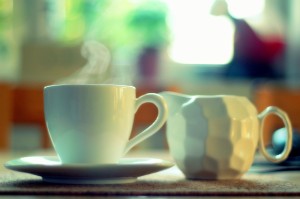 grab a beer or coffee with you might be a good first step. Let him know that you know he must be dealing with a lot and that you don’t know how well you’d be able to handle it in his situation. Reassure him that you don’t want to replace him. I had this talk with my kid’s bio dad years ago and it has paid amazing dividends in the rapport I have with him. Unless he’s a completely irrational person, he’ll appreciate that you showed him some compassion. Once you’ve settled that you will be in a position to talk about what’s most important; the kid’s happiness. They will certainly be much happier if the adults in their lives aren’t arguing over them all the time, right? You don’t have to love the guy. You don’t even have to like him –but you do have to get along with him until the kids are grown. In fact, as long as you and your wife are married, he’ll probably be around because the kid’s will keep him linked to your family. It’s best to find some common ground –and soon.