I’ve been in and out of Afghanistan. In the last three years I’ve spent about 9 months home. I’m 22 and so is my girlfriend, Ms. B. We see ourselves getting married, but we want to wait until I can settle back into civilian life before I meet her 2 yr old daughter. I come home in December and I promised Ms. B that this will be my last deployment for a while. Being gone for so long and not having yet met the daughter in person Ms. B constantly sends videos and pictures and I get face time with them occasionally. So I know the daughter and I love her as if she were my own I show her off to everyone I’m deployed with. My dilemma is when I get home I want to meet the bio dad who is actively involved in her life, but I’m not sure what to say to make him comfortable with me being here for our daughter, I will be cautious with my words when I speak with him (Ms. B says I have to call her my daughter because that’s what she is and I’m happy to call her that.) I want to make this situation as easy as I can for everyone I guess I’m just nervous and need some advice or support on if I’m heading in the right direction or what.

Thanks for reaching out. You’ve got good head on your shoulders. Most men who become Stepdads 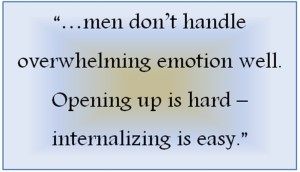 don’t take the time they need to prepare for success. It’s a natural mistake to assume being a Stepdad is just like being a bio-dad. Unfortunately, it’s much harder than that. There are several factors that work against Stepdads. When we don’t deal with them early they can grow into major problems. Sadly, most dads don’t. That’s why there’s such a high failure rate in blended families –between 62-74% of these couples will divorce. Good news! I can help.

You’ve put your finger on one of the immediate challenge most Stepdads run into after marrying a single mom; how to build a working relationship with the bio dad. Give yourself a few points for understanding that might be an issue. Good men love their kids, bad men may or may not –but they do feel a sense of possession over them. Fathers usually feel uneasy (and can even feel threatened) when a new father figure comes into their children’s lives. It’s a reasonable reaction. Dads should instinctively want to protect their kids from the unknown. This reaction will make your job a little harder. It’s important to build a bridge and forge a working relationship with the bio-dad. It probably won’t take much. You might be surprised -a little effort will go a long way.

Most guys are reasonable men

Many Stepdads (…probably most) don’t reach out to the bio-dad about the kids. It’s an uncomfortable topic, so they prefer to avoid it. The evidence shows developing a working relationship with the bio dad has a positive long=term benefit. When parent groups can work together there is less stress for the child(ren), less stress in the marriage and the focus is more likely to be on the kid’s success and less about individual needs. A consistent child-focused effort results in happier children, 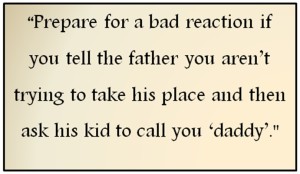 increases kid’s school performance and can even a lower the likelihood of drugs or alcohol when they become teens.

Take the initiative to talk with the bio dad. Bio dads are less likely to reach out to a Stepdad. For them, the situation can be very emotional. Bio dads often feel a great sense of vulnerability. As a soldier you probably understand better than most; men don’t handle overwhelming emotion well. Opening up is hard –internalizing is easy. Ignoring our feelings helps us temporarily avoid discomfort–but doesn’t make it go away. Avoidance breeds confusion and uncertainty. The tension can increase over time.

Most guys are pretty reasonable. Take time to treat the bio-dad the way you’d hope to be treated if another guy came into your child’s life. Usually this makes a huge difference. Don’t forget that he’s vulnerable. Reaching out will usually help him release a lot of his anxiety. Make sure you let him know you’re not interested in taking his place. That’s a huge concern for fathers. You need to build a working relationship with this guy. It’s important to start right away. This is a person who who’ll be in your life for a long time –as long as the child is. Reducing his stress level also helps reduce or prevent stress in your home. An anxious bio dad has much more effect on their child’s home life than most people realize. This simple effort can show immediate results. A good video about this can be found here.

Another challenge is the issue of what she should call you. Prepare for a bad reaction if you tell the father you aren’t trying to take his place and then ask his kid to call you “daddy”. This is a title he feels is his alone. He has an emotional attachment to it. Many moms (…and probably most) want a sense of family. So many will want or expect their kids to call or regard a Stepdad as “dad”. It may seem very appealing -but resist that. The great feeling your wife gets from feeling like a family will be overshadowed by the resentment it raises in her ex. With only a few words, an angry bio-dad can easily block your efforts to bond with your daughter. Make him a partner –not an enemy.

What you’re called doesn’t matter. Focus less on being called “dad” and more on being a great parent. 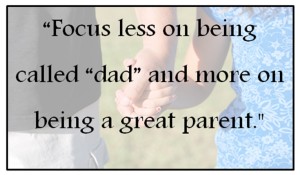 Raise her as if she’s your own. I decided early on that I would raise my kids just as I would if I’d helped make them. I often use the word parent when I talk to them or about them: “I’m such a lucky parent.” This has created an understanding between us. They know my role in their lives. When picking them up at school or from a friend’s house I introduce myself as one of their parents. I tell them I’m there for “my kid” or sometimes (to avoid confusion) I introduce myself as their “dad”. None of my kids calls me dad, but not out of spite. They have a dad. That’s okay. What I’m called doesn’t change the way I feel about them. They know I’m one of their parents and I love them.

If you’re always there for her and act as man she can look up to she’ll see you as a parent. She’ll develop a strong love and bond. Because she is young she may even decide on her own to call you “dad”. That’s a common –and a natural reaction in small kids. But many studies have shown there’s little benefit from forcing it -especially when the father is still in the picture.

Be prepared for some resistance

Remember, she was his little girl first. If you already love her –just imagine how strong his emotions are about her. From time to time her father might feel threatened by her connection with you. It doesn’t take much –maybe just a hug. If you start to pick up on resistance from him don’t take it personally. Talk to him. Keep that good open line of communication. Remember, this is a partnership; your goal is the same –to raise a great kid. It’s a project you share.

Couples rarely split up because things were working too well. Usually someone is left feeling rejected. Because of this, there’s 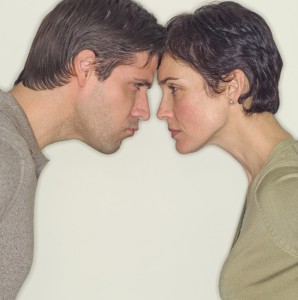 usually some bad feeling left after a break up. If she has any negativity about him don’t let those feelings interfere with your efforts to play fair. Perceiving him as an enemy will only work against you. Make sure to invite him to her school events and functions. Celebrate her success together. Help him be the best dad he can be. He’ll probably appreciate the effort and it will remind him that you aren’t the enemy. He’ll see that you care about her. Some bio dads drop the ball and their kids feel let down. If that happens it’s okay. She’s still got you and her mom. Kids want their daddy’s love, but they gravitate towards parents they know they can count on. They need that stability. Do the right thing and you’ll have no regrets.

Congratulations on your engagement and good luck with your new family.