For the past year we’ve been conducting a survey of Stepdads and former Stepdads. The poll was designed to improve on the existing research and give a better idea what factors contribute most to the high divorce rate in blended families.

Most of the information available on the modern Stepdad experience comes from hard statistics. The existing pools of data are helpful in understanding the basic questions:

We wanted to know why they fail. Understanding what causes the vast majority of blended families to fail is the first step in saving these marriages. We formulated a plan to collect the personal experiences of these men, in hopes of giving families the knowledge they need to help them succeed. 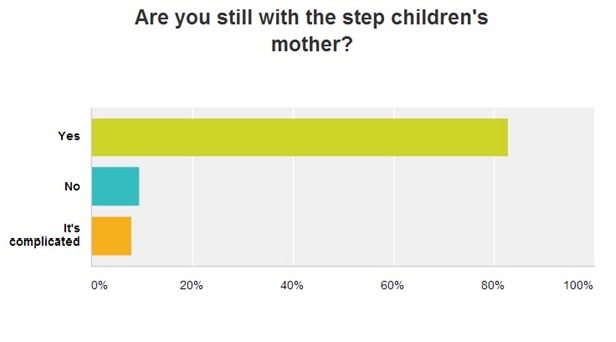 This survey was conducted over a full year. We received responses from men around the world. The majority of the participants were form The US, The UK and Canada. Australia was also well represented. We asked ten questions of Stepfathers and former Step fathers.

Biggest Contributing Factor to Breaking Up

3. 30.77% reported these three were important factors in their break up:

Problems with the biological father

Out of control kid(s) (hers)

4. 15.38% listed “being overwhelmed by having an instant family” as contributing to the break up

5. Infidelity (by one or both partners) was also listed by 15.36% of respondents

Our understanding of the blended family dynamic is in its infancy –and the dynamic is still evolving. Divorce and remarriage are becoming the norm. So are blended families. This change in our culture creates a new set of challenges. Where there were once parents, there are now sets of parents: mom and her husband… dad and his wife. Just a few generations back the Stepdad’s role was better defined. When a man married a single mom it was typically assumed he’d function as the father in the home. He know his role. Today -things have reversed. The Stepdad’s role is undefined. 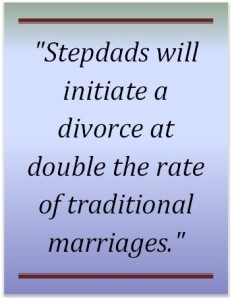 It’s no longer safe to assume. Many moms and Stepdads have different vision of the role the man will play. Couples who don’t make sure they’re on the same page usually run into problems later.

Many couples have a disconnect in communication when it comes to the definition of “step parent”. Stepdads assume they know what’s expected of them. Most bio-moms think their new husband understands what role she wants him to play. These assumptions cause avoidable problems. The couples quickly run into problems and begin to have disagreements. Even when working with the best of intentions couples can find tension growing in their families.

More than 61% of the men no longer in the relationship reported they were the ones who left. This is a shocking number. A poll from divorcerate.com shows that about 30% of divorces are initiated by the husband in traditional marriages. The results from tour poll show that Stepdads will initiate a divorce at double the rate of traditional marriages.

The divorced Stepdad responses in our poll clearly show the importance of communication. Nearly 2/3 said arguments over the kids and a feeling of being unappreciated were contributing factors to breaking up. About 1/3 said they weren’t clear about their parenting role. These are men who felt they genuinely tried to make it work. It’s hard for a guy to succeed when he’s  trying to do his best version of “Stepdad” but his wife has a different vision. It’s easy to start feeling frustrated. But it doesn’t have to be that way. When couples talk about the role the Stepdad will play, they can reduce the turmoil and avoid hurt feelings.

Other Significant Results From the Poll

The results are helpful. The modern blended family deals with many challenges they aren’t prepared for. The traditional family has evolved and adjusted over hundreds of years. As blended families become the new normal they will also have to adapt. The first step is to understand the forces that break these families up at such a high rates. Understanding this will help more families avoid divorce. The results will be analysed and used to publish more papers on the topic. We’ll continue to go through the responses to see what information can be used to  help Stepdads succeed. Look for more information on this soon.

One obvious outcome: Talking about the issues appears to be the key to reducing the divorce rate.

Full results of the survey can be viewed here.