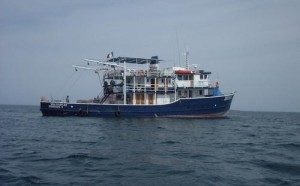 The Erik in calmer seas

fishermen on board. Nineteen survived, one was recovered and seven could not be found. Al Mein, was among the missing -and presumed dead.  Hope was lost. The seas had been high that day -20-40 feet high. A few had been seen fleeing the doomed ship, but not Mein, who was known to be below decks. At 61 years of age, Al Mein was gone… but not forgotten. Mein left behind a wife and extended family. Among those left behind was his 46 year old Stepson, Joe Jacinto. Joe Knew Al’s life was lost, but it bothered him to think of the fate of Al’s body; to be in a dark place for eternity. The ship was gone. No one could say for sure of it’s exact location, but Joe was willing to risk it all to make sure his Stepdad didn’t spend eternity beneath the waves. His story inspired the staff of Stepdadding.com.